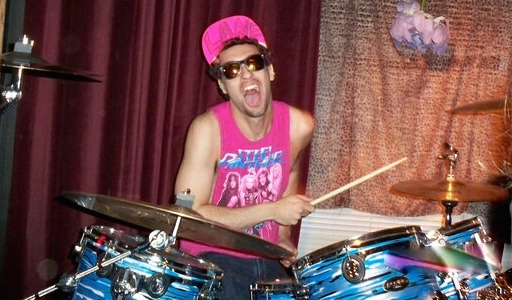 Musical past and present in one rambling run-on sentence: I’ve been playing in garage and punk bands since before high school, I’ve been grinding the small-time Seattle club scene and have had the chance to play a few big venues with a couple of big name bands, all that work has led me to my current position behind the kit for Gliceryn.

My musical taste is all over the place, but being a drummer, I like anything that brings the heavy. I’ve been known for my love of 80’s glam metal, so I’m gonna say, that bands like Motley Crue, Def Leppard and Dokken have had a major influence on me, but I love my 90’s So Cal punk rock like Bad Religion, Pennywise, Offspring and Strung Out.

“It’s better to burn out… than fade away,” -Rock Of Ages / Def Leppard (Although they didn’t do a good job of that haha)

This is a tough one because I could have like, a week of perfect days. But let’s say, in my working life, I wake up on a tour bus and Toby (our manager) tells us what city we’re in and what time we have to be at the venue and then Devin and I shred our BMX bikes around the city until we either get arrested or need to be at the show. In my personal life, I wake up in my riding gear and ride my dirt bike until I can’t move haha.
4. What would your friends say they appreciate the most about you?

I keeps it real.

My Kasher lighters haha. No, but seriously, I really appreciate everything I have in my life, but I love my beautiful drum set. And my dirt bike is pretty crispy too.
6. Who were you, or would you be nervous to meet?

I think the drummer from Strung Out (Jordan Burns) is a really cool dude and I’d probably be pretty geeked out to meet him.

Play my drums in front of as many people as possible.

Staring at the backs of George, Devin and Christian, playing in front of way too many people.