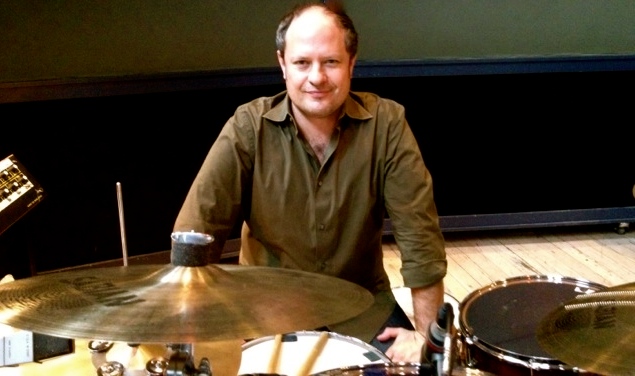 Musical past and present in one rambling run-on sentence: Failed academic drops out of SFU to pursue non-stop Canadian touring and drinking of domestic beer in the early 90’s then band signed to MCA and tours some more then breaks up only to send me into a career of freelance studio, live and touring drumming with artists from all genres ranging from Colin James to Harry Manx to The Paperboys to Barney Bentall to Jim Byrnes, to Craig Northey to Steve Dawson to The Sojourners and various sundry folk, jazz, country, blues, and rock artists.

I grew up listening to my Dad’s eclectic record collection.  He was a disc jockey on the Pirate Radio boats off the UK coast in the 60’s and he returned with albums ranging from the Rolling Stones to Roland Kirk to Stephen Stills to John Coltrane. I adore Miles Davis, Coltrane, and their Be-Bop ilk. I also like funk and soul music like The Meters, James Brown, Sam Cooke… I listen to lots of melody-heavy new music and especially dig Grizzly Bear, Bill Calahan, Beck, Tortoise, Calexico, Animal Collective….

My Mother passed on a love of classical music to me as well, mostly romantic stuff from Hayden and Mozart, Dvorak…

The aria Nessun dorma from Puccini’s Turandot as sung by Pavarotti always did it for me. It’s so rich and manipulative – I’ll always tear up like a sucker. A close second would be Coltrane’s Naima, written for his daughter.  Heartbreaking.

A late sleep-in followed by a hot shower with sports radio blaring. A full pot of dark roast coffee from a french press, a walk with my favorite podcast, a noodle lunch over a newspaper, then hours in front of the computer with great music playing. A glass of crisp white wine with the evening news, a great home cooked meal with my gal followed by some great local music at a bar. Then, catch the red-eye to San Fran or NYC….

My Grandma’s necklace. Or my Juno Award.

I clammed up when I met Russell Crowe. But I would have loved to have met Oscar Peterson.

Helliwell Park on Hornby Island, BC

Practice my instrument. Listen to music. Travel. Be kind to people I love.

In good health, travelling with music and doing tons of recording work.  And also a successful voice actor. That’s a damn hard business to crack. 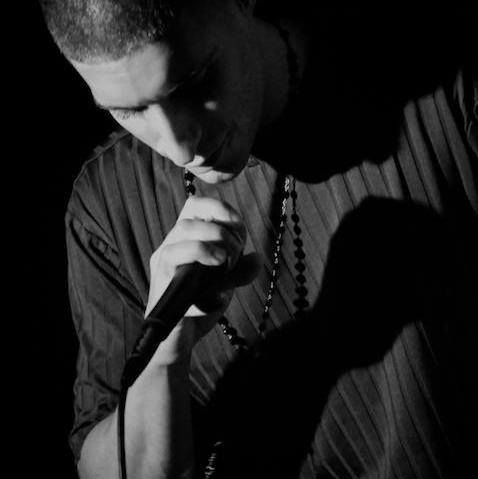 Musical past and present in one rambling run-on sentence: grew up with 2 deaf parents who didn’t want to judge music so they let me pick anything I wanted, I blindly chose a rap album and proceeded to write poetry all my life fused with dirty rap lyrics, I picked up a bad drug habit and it ran on for 4 years until I was kicked out of my home, went to rehab, wrote an inspirational, musical good-bye letter to drugs, and when I came home I continued to write positive, reflective music that relieves issues and thoughts that rent space in my head.

1. Who are some of your favourite composers, musicians and bands from the past and present? Frank Sinatra, Tony Bennett, Jadakiss, Tim McGraw, Mike Buble’, Eminem, J. Cole, Macklemore.

Wake up on my own time, take as long of a shower as I would like, find a check in the mail, eat Italian food all day long, watch a New York Ranger hockey game, and enjoy a nice cup of coffee.

My Rosary Beads given to me by my Grandfather.

The president of Iran. In Iran.

Yes, I would ultimately like to open a rehab facility in New York that I can run, I help addicts and alcoholics regularly, but I want to be able to reach them on a larger scale, I don’t approve of the way many treatment centers across the United States operate.

Working just as hard as I do today, my mind always races, and I go insane when I’m standing still, literally and metaphorically. I don’t look forward to retirement, and I hope that I am never forced to. 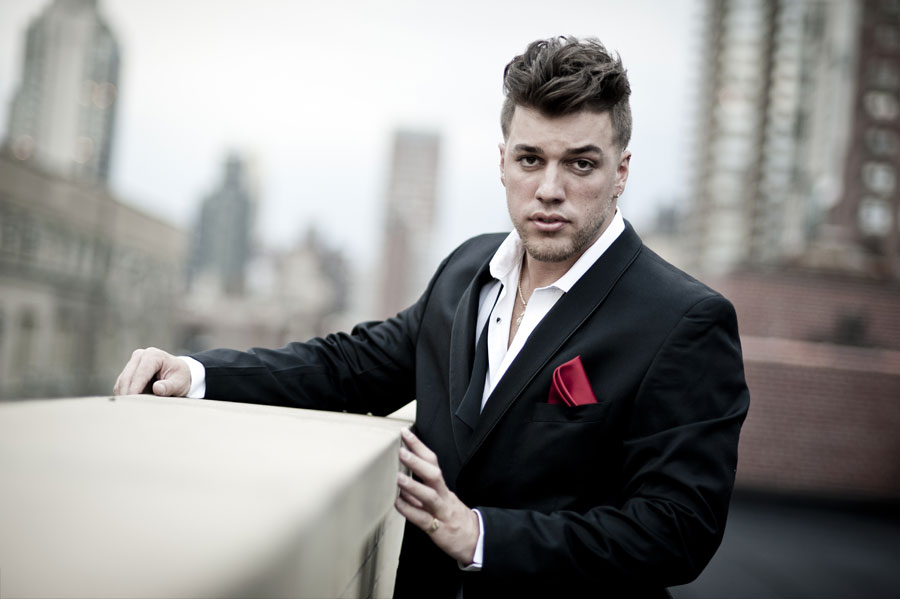 Musical past and present in one rambling run-on sentence: I started singing and songwriting when I was in the seventh grade and from there it just kind of went off into something even bigger and I realized how much I loved it and that this would be the rest of my life hands down so I started putting together my songs into a best of the best list worth making an album from and after that I started booking shows and that routine has kind of become just my way of life.

The song that hits me the same every single time would have to be Pavoratti’s “Nessun Dorma“. And I’ll be honest, I have no clue what he’s saying. But it almost doesn’t matter. The passion and raw emotion of the vocals are heart warming and so incredibly moving. The first time I heard the song I sincerely got choked up.

To me my perfect day is being creative with music. And I’m not just saying that for the sake of this answer. I don’t truly enjoy my day unless it includes doing something regarding the creativity with my music. Naturally a sunny day and a cheese burger wouldn’t be so bad either.

I think my friends would say they appreciate my straight forward hold no punches honesty. And that would probably go hand in hand with my knack for levity.

I would say my most valued material possession would have to be my necklace. It was my grandfathers, and when he passed away I began wearing it. He was a person who I truly looked up to and aspired to be like.

I would most likely mess myself if I had the opportunity to meet Billy Joel. That man is a modern marvel, a lyrical and musical genius. He is the kind of artist where people 200 years from now will still be talking about him and his music.

It would hands down be Lake George, NY. Lake George puts me at ease almost immediately. There is this serenity in Lake George that is beautiful. The mountains, the crisp fresh water, the kind and warm people, all while remaining in my home of New York.

I would like to just continue doing what I love in the future. That’s really the only thing I can hope for. A life of music and enjoyment.

On the stage of Madison Square Garden…and being able to say “Wow, can’t believe this is my 15th time playing here” ha. 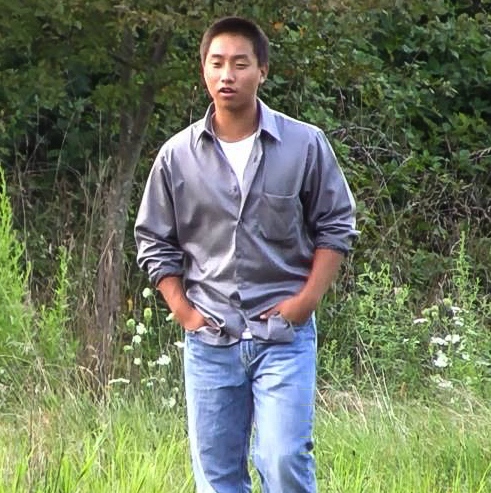 Musical past and present in one rambling run-on sentence: I began playing music (piano) around 5 years old, and began writing songs with the guitar around 12, learning how to improve my music every day up until the present day, where I continue to write music in more of a rock/pop rock tone.

My biggest idol is Dave Grohl, however my favorite band by far is the Foo Fighters as a whole. My other huge influences are Bruce Springsteen & the E Street Band, Green Day, the Goo Goo Dolls, Matchbox Twenty, and 3 Doors Down.

“Thunder Road” by Bruce Springsteen definitely. It was the first true classic rock song I remember my dad showing me one car ride to my elementary school. I truly believe that’s when I realized how amazing music can sound, and very well could have triggered my will to write my own music.

Doing something fun with my best friends. Doesn’t even matter what we do. But every perfect day I’ve ever had has been with people that I love. Spending time with my friends makes me happier than I’ll ever be.

A picture that was taken by my grandfather. It’s of a sunset on the lake that his house was on in Pennsylvania. He was so proud of that picture; entered it into a photography contest. I have the picture hanging in my room today. I remember him every time I look at it.

Any one of my biggest idols. They’ve had such a huge impact on the type of musician and songwriter I have become. So if I ever got the chance to meet any of them, I wouldn’t want to say anything stupid!

My grandparents place in the Pocono Mountains. I had so many amazing memories there with my family. It’s so beautiful and quiet!

I want to continue to coach baseball. It’s a game I’ve always loved and learned about over the years. I’m going to try to be apart of baseball as much as I can in my life.

Obviously, my dream would be touring the country a hundred nights in the year with an all-star band and with a new record to be released in the matter of weeks. However realistically, I just want to find myself in a successful financial situation and a somewhat enjoyable career; and of course, great friends and family to share my life with.