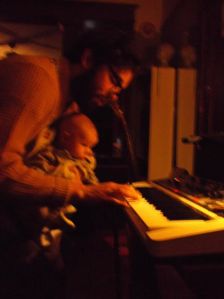 Musical past and present in one rambling run-on sentence: i was in choir since i i was lttile and thought iwas gonna make comics strips and started teaching myself piano at lunch breaks in ninth grade and then switched to electric organs that i’d watched my grandad play and switched to more portable guitar after graduating from high school and tragedy struck in college and i could’nt paint anymore so i put the pepper on writing and singin’ songs and that’s gone on and off for ten yearsish but i got into looping and drum machines and even had a band with traffic called special peoples and played keys with grit for a while and now i play bass with SHAHS and try to write pop music on my looping setup that sounds like prince MJ george michael billy idol and big black all capture on a demo called PARIS MINGUS made with audacity on a 2003 macbook’s internal mic.

waking up at 11 so i can say “good morning” without people smart-assing at me. do my emails and my social media then practice guitar scales to the news then random ufo vids then some actual shows interlaced with some songs (UMO has been bumped a lot lately.) then i walk downtown with my guitar and start working on whatever new songs-wait… perfect day. i was doing typical. perfect day: wake up after noon in a tour bus in a new town. eat a decent breakfast and then walk around looking at architecture or people in hopes of finding some i get along with. work on new beats, sound check, dinner, play the show and after party a little then get some rest and do it all over again.

when i leave, so does my aroma. if you’re done with that, i will finish it. i can sleep most places and even through a party. sometimes i have stuff in my beard and they laugh. and i believe in stuff with a child-like somethingness.

probably grimes. and i’d be nervous about being nervous. she’s a dissonance genius and she seems nice from her interviews. i have no filter and an extremely dark sarcastic sense of humor, especially when i’m nervous, so i’d be afraid of trying to be funny then having to dig my foot out of my mouth. i should probably just stick to one word impersonal responses, grunts, and nods. and then i’d just be worried about smiling too much and if i was holding my arms in a weird way. i mean really who does that with their arms? idiot! idiot! idiot!

maybe in a really tall building, or san francisco, or watching a ufo zip around. i saw one over los alamos once. really.

i really like recording and producing. i scored a short film. i just started writing a new concept album, and i think i’d like to get more into making videos. i want to make a multidimensional experience of it all, like another reality is bleeding into ours. you know? like t.v. but on a stage. i want to be the j.j. abrams of pop music.

9. Where would you like to find yourself in ten years? it would be nice if i could find myself in less than 10 years.