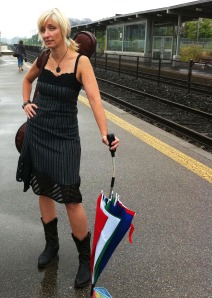 I was lucky to be born into a house with 2 pianos, so I learned piano before dropping it as a teen, then taking it up again and going to music school where I met many marvelous people and learned about jazz, world music, new music, improvisation and got my mind blown at the Glass Slipper, took up the trumpet, then got sidetracked by folk, and took up the accordion and joined a band called Fear of Drinking and had some great times but eventually got fired (oops), but by this time had met the lovely and talented Koralee Tonack at school who loved the same songs as me, and we formed Time Waits which became Spygirl which is a wonderful warm messed-up musical family of the dearest friends and most talented souls, but everyone’s having beautiful babies and doing their lives and I’m in Toronto now and I’m a happily married stepmom of 4, and I miss my Spygirls and also my bandmates from other Vancouver bands I inhabited (such as Belinda Bruce and the Tawny Stars, and The Neins Circa) and good people from places I’ve worked along the way (Coastal Jazz & Blues, The Vancouver Int’l Film Festival for example), but luckily out here in the humid summers and frigid winters the songs keep knocking on my door and wanting in, so to humour them I took up electric guitar and formed Shade (a pop/rock quartet); we recorded an album in 2010 called Highway, and then I made a new Shade EP (One Last Show of Hearts) with just me and my friend Tim Vesely, which will be released with minimal fanfare on Nov 22, and in the meantime I’ve formed a duo with my pal Llynn Kellman who is awesomely creative and gifted, and we’re called The Llynn and Jane Show and I consider myself very fortunate indeed to be able to do what I love.

this love of life makes me weak in my knees,

so when we get there make your play,

’cause soon I fear it’s gonna carry us away

to a promised lie you made us believe,

for so many men there is so much grief,

and my mind is proud but it aches with rage,

and if I live too long I’m afraid I’ll die.

Strangers on this road we are on, we are not two, we are one”

from the song  “Strangers”, by Ray Davies and The Kinks

It would start with strong coffee and acoustic guitar in the kitchen; it would contain no deadlines, and would involve a lot of aimless puttering and abstract musing. A friend would drop by late morning and we’d laugh a lot. Then just as the friend departs, there would be a knock at the front door, and a man dressed smartly in a 3-piece suit with a wool cap tucked under his arm would hand me a letter, which would turn out to be an invitation from Tom Waits to open for him on his next tour. I’d hug the man, tip him $100, then watch him ride away on his bicycle. I’d go back into the house and resume puttering, but now with intent.

A piece of jewellery that my Dad made for me.

Writing songs for the next Clint Eastwood or Wes Anderson film.