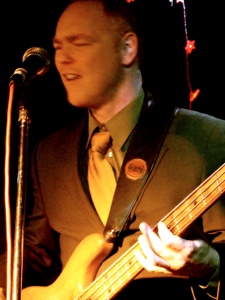 Anything anyone would let me be involved in starting on trumpet at age 8, baritone euphonium age 10, electric bass age 11 until present with guitar, upright bass and ukulele thrown in there… I played with some cool folks too.

Jazz- Mingus (freakin genius bassist and composer, no doubt about it… could also be in the classical composer category)

Folk- Martin Carthy (just pure class and talent… and he remembered my name three years after we met and I kissed his daughter.)

Rock- ACDC (doesn’t get more straight up than that…  it’s rock!)

Punk/Alternative- Alice Donut (anything from that era Alternative Tentacles is kickin… could mention NoMeansNo… but the Donut makes me feel dirty and glad to be, all at once)

Anything James Jamerson played on bass.

Being with my family without any time constraints.

You would have to ask them.

I was nervous when I met Mike Watt…. no reason to be… hell of a nice guy.

I’m there, right here with my family.

Playing music with a bunch of friends. Having a good time and not thinking of how stupid I look…. hasn’t stopped me so far!

One thought on “Nine Questions with Keith Rose”