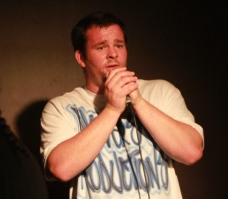 Musical past and present in one rambling run-on sentence: Dy-verse Productions released Sweatpants n D-bo’s did a interview with college of san mateo newspapers, went on a tour, printed flyers, and business cards did promo around bay area then went to more of the west coast, send music to different radio stations, did an interview on KPOO, had my own show on KZSU, started a podcast, started making videos releases The Levey vol 2 along with executive producing K-rek No Roads can hold me, put showcases together went to a few open mic rocked sweet fingers foxes, octopus lounge did a college tour, promoted heavily, did more interview with Serena speaks, did more internet pr, did a couple blog interviews including indieminded and ninequestionsformusicians, updates on websites, recorded mix tapes, digital releases, working on an interactive cd

“No Luv for the work put, no thanks for help i give” K-rek

My Positivity, that I’m always laughing and happy.

5. What is your most valued material possession? The CD’s that i released, any books that i was published in, and the frame that my girlfriend gave to me for the release of the albums.

I think i would be nervous to meet the former President Bill Clinton.

I think it would be in some tourist place in south america, where the beach is beautiful.