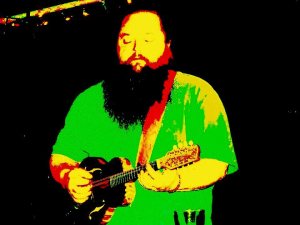 Musical past and present in one rambling run-on sentence: I play music and love being on stage mainly with my mandolin but i have been known to tickle the keys or toot a horn.

pretty much anything that’s about growth….community, personal, environmental, trees or children…..growth could also mean change.  I like songs that give power to the people….bring’s people together to overcome their troubles.

it would have to be unexpected and different than any other day…part of it would have to be filled with all the people i love in the world…which is everyone in the world.  I would also need time alone and time with my wife.  I would want healthy vegan food but then also a cheesecake and bacon burger at some point. I would be playing music with the whole world dancing.

Not sure….you would have to ask them. I know i try to always be there for my friends no matter what it is and I always try to be the best person i can….so hopefully they appreciate everything i am or do.

it would be a toss-up between two things….one being my James Curtis Mandolin and the other being my labradorite locket with a picture of my son, Cedar in it.

I guess anyone dead