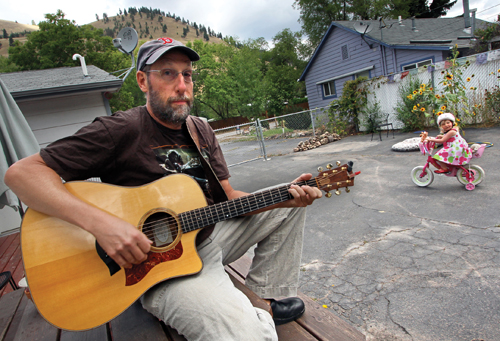 Musical past and present in one rambling run-on sentence: Saw The Beatles on Ed Sullivan and didn’t care. Was petrified by Led Zeppelin’s Dazed and Confused coming from my tiny transistor radio. Loved Cecilia. Loved Suite: Judy Blue Eyes. Loved Southern Man. Loved Roundabout. Loved Killer Queen. Loved The Piano Has Been Drinking. Loved Mud Shark. Loved The Grand Illusion. Went to college. Was turned on to The Grateful Dead. (Thanks Chris C.) Saw some shows in ’77-’78. Started playing guitar and writing songs in late 1978, after seeing a Jerry Garcia Band show in Cheney, WA. Saw some more Dead shows. Saw John Fahey. Saw Bob Marley. Saw Joni Mitchell. Got first electric guitar and Ibanez TS-808. Still have the 808. Formed The Porcupines in Santa Fe in late 1981. Saw some more Dead shows. Porcupines broke up in Eugene in 1984. Wrote a lot of songs. Played in Boston a lot between ’86 and ’94. Saw some more Dead shows, as well as some Sun Ra, some Lucinda Williams, Tom Waits and The Church. Wrote a lot of songs. Played in Strunk and White. Played in The Bagboys. Formed Th’ Spectacles in 1994. Returned to Missoula. Wrote a lot of songs. Played bass with Tom Catmull 1999-2003. Played some blues bass after that. Got paid. Wrote a lot of songs. Fronted The Trillionaires 2004-2006. Did not get paid. Now – Solo artist who wishes he had time to be in a band phase. I know there are a lot of periods in this “sentence,” but it sure runs on and rambles, doesn’t it?

It has a bird in it that I’ve never seen before.

6.  Who were you, or would you be nervous to meet? The dentist.

The place the words come from.

Having lunch in Rarotonga with my wife, daughter AND the person who discovered the cure for Type 1 diabetes, whom we invited on our vacation because we love that person and because we just won the lottery.

*(and regarding that 2004 ALCS game 4 ticket stub, that is total bullshit. Of course I didn’t go to that game.)