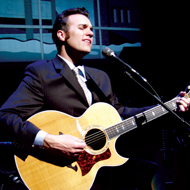 Dad sang me to sleep, mom died young and so became obsessed with guitar and old tunes, spent teens early 20s hidden in bedroom recording hundreds of songs nobody would ever hear, started rock band Alvy and made a move to the big city from the burbs, realized band was probably not best outlet for creativity and released first solo album Cowlick Bravado, met CVM who became lover, co-writer and manager, released Unavoidable Truth with Josh Finlayson, Sarah Harmer and other musical heroes, got ‘discovered by Stuart Mclean and the fine folks at CBCs Vinyl Cafe and enjoyed much quality airplay and only real touring, moved to BC to blow fresh air into songs, accidentally released 50s era tribute to Elvis, finally released original album Staring Contest, married muse, bought wee home studio and started writing for film and tv in hopes of being heard all over the world one fine day.

Waking up with my love, cuppas by the sea, writing songs in bed, bike ride in the woods, late afternoon glass of wine that turns into a tasty homemade dinner with friends, watching Star Trek with the wife, going to bed early with a clear conscience.

My Canadian made La Patrie nylon string guitar bought from Rufus Stewart has been good to me, but trumped by my wedding ring.

Was: Neil Finn. Would be: Paul McCartney

Kauai, HI. the pine forest on the southern tip.

Making music full-time for a decent living, healthy and in love. Hope that’s not too much to ask.